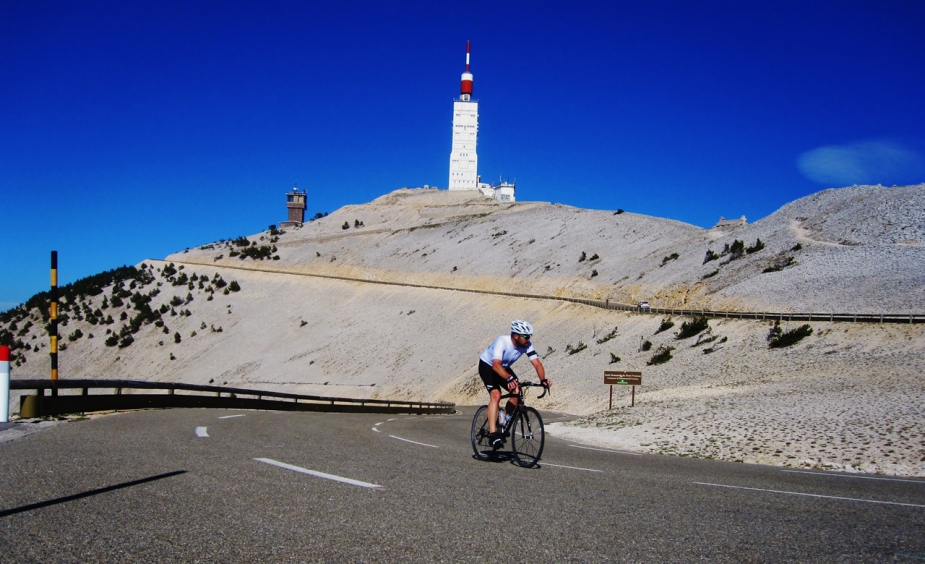 Well that was the week that was. Was it only Monday that I started on this journey into the Alps, seems like years ago that we all gathered in a small conference room in Le Castellat hotel just north of Nice.

With no Air conditioning and plus 100 degree heat I should of known then that these people just want to break you..

We departed Monday for Valberg a distance of 194km and just over 5,500m of climbing. We rode first on masse thru the promenade des Anglais in Nice trying hard not to crash, as we weaved through the mass of bikini clad joggers on the cycle path. The women were also attention grabbing.

The climbs started steady but I was climbing at a pace that we carry over Bermuda bumps and this toll would come back to haunt me as the day progressed.

Just before lunch on the Col Turini I was in bits, with energy drink overload in the scorching heat. Unable to take on food I pressed on through two more climbs to the Couillole where my world unraveled and I became a gibbering wreck, only able to push my bike and walk with 6km to go to the hotel. A fellow challenger, a Russian aristocrat nicknamed the Czar on previous trips, on account of him having his own seigneur. Pushed my bike to the top before I was picked up by a feed van and deposited at the hotel, a shell of the person who started the day.

Day two, confidence in bits I really started to question the validity of this whole thing. I did make two very good decisions that morning though, limit the supplements and climb at a slower pace. Straight into the 2,000m Col de Champs, I realized as the only rider not on compact I could actually stand for long, long periods and feel good. A local peddled up next to me around 40 minutes in and asked if I was on Cent Cols, when I said yes he told me I was mad, but, bravo and bon journey.

7 climbs later  after getting caught in the coldest rain storm I have ever experienced on the descent to Sisteron, I arrived at the hotel a wreck but not quite as gibbering. I then skipped communal dinner and grabbed the biggest pizza I could find. On my return to the hotel I was ushered into the dining room and placed next to group leader Phil and served the dinner I was not supposed to bail out on. Two words schoolboy and guilty spring to mind.

At the meeting that night I had serious doubts if I could finish this. Riding solo for long periods it was tough. If you can imagine your hardest ride ever, then repeat it the next day and do it for ten days you will be getting close.

Stage 3 was a big day not in distance or elevation but because the last climb after 100 miles would be the famed Izoard. I settled into a group of 5. Matt the American Navy Seal, Stale the  Viking and Bob and Ian the scouse father son duo and bloody good cyclists. This little group would be the team for the event it seems. A good day because all though purgatory it did not have to be hell with good riding companions and make sure we kept telling ourselves we were on holiday.

A few kilometers into the Izoard, Stale kicked on and went out of sight then when we passed the alpine villages of the lower slopes I got my second wind and reeled most of the group in by the summit. Only the pro level guys getting the better of me, but then everyday they are at the hotel one to two hours earlier than most. The dramatic changes this climb goes through are just that. From Alpine chocolate box villages to tree lined hairpins complete with road graffiti for Allez Voeckler or go Froome. To lunar landscape at the casse deserte, just before the summit.

Day 3 in the bag and starting to feel good. Day 4 still scorching hot and people now developing open saddles sores. One guy was rescued on Izoard. A fast guy, but he had dehydrated so badly he looked like Jim from Taxi back at the hotel. This day and the next would be the hardest two days, 241km with the Madeleine as the last summit.

Tough is an understatement. The Sarenne was a brutal climb with 15% rises but the Croix de Fer that followed 50km later was mentally exhausting. Big long stretches left little to the imagination as they panned out ahead of you for miles on end. Finally back to the valley floor with 108 miles covered we began the Madeleine. 18km at an average grade of 8% allegedly. I say this because the average grades are a nonsense. If the climb false flats or turns down for the merest cm it seems it is then OK to double the grade to claim it back.

Stale starts to wilt on this one, Matt the seal too, while the Pughs rode strong and summited about 5 minutes ahead of me. After one hour 45 of suffering I dipped into the summit café for coffee and newspaper to put under my jersey. we still had 35 miles to the finish hotel.

Day 5 another toughie. Stale is in trouble with open saddle sores, Matt has an upset stomach and so it is our duty as the 5 to look after each other. 60km in on the 4500ft Arpettaz Matt cannot continue and is swept up by Jimmy the broom. On the descent Stale too is in trouble and we make the decision rather than hit the next climb to the summit lunch stop we will stop get  Stale some food. A good move because 45 minutes later we have devoured the best omelet I have ever tasted a n 2 1/2 pints of Orangina.

The locals here understand the mountains and so the natural spring fountains in the villages going up have been life savers but, also they have no hesitation of taking your bottle inside and getting you water.

This stage has no monster climbs in height but has 13 climbs many HC and the steepest are truly brutal. I feel good though and after being on of the first into the first feed station during the morning and only Bob stays with me on descents, we back off to ensure Stale finishes.

We roll into Annecy the last to arrive but together. Rest day beckons in one of the most picturesque places on earth. A day to take it easy, but then again no. Bikes to be cleaned, clothes to be cleaned, injuries to be looked at. 24 hours really won’t be enough