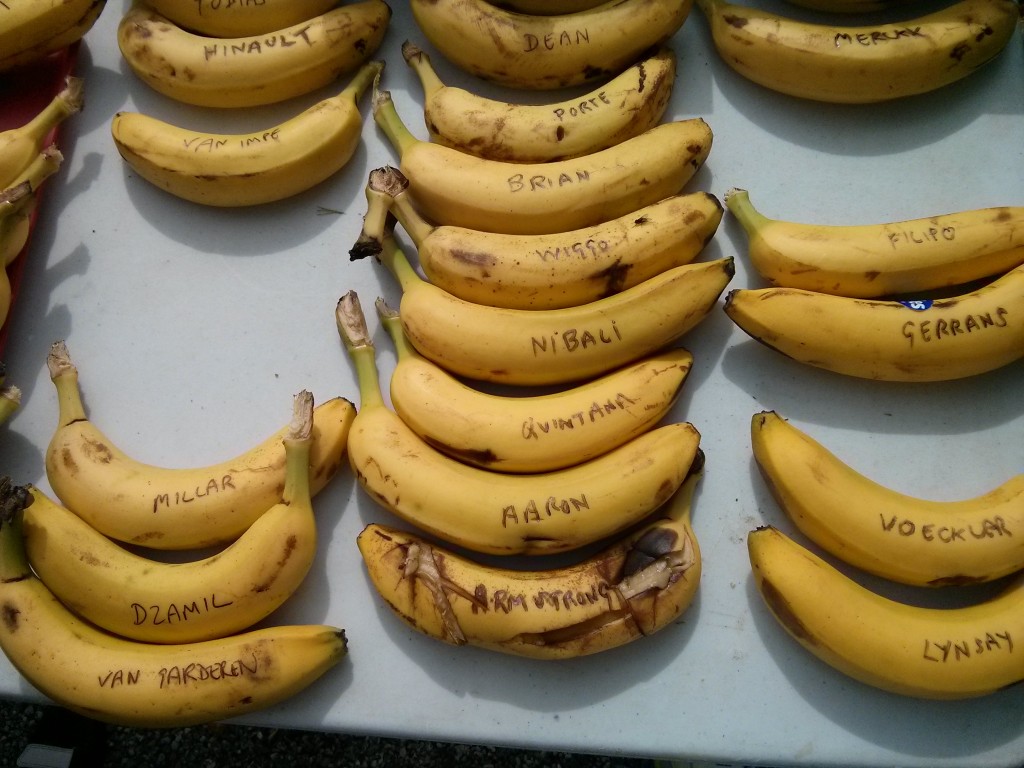 Annecy, such a beautiful city and if I ever get the chance to go back and absorb it for what it is I will. Instead the rest day was spent at the laundry, then, accompanying Stale to the emergency medical center  to have his bum wounds addressed.

Once I realized he was in good hands , I excused myself and stocked up on coffee and gelato. Not forgetting my ride. which I opted for in jean shorts and sneakers, which made stopping and eating half a dozen crepes a little less conspicuous.

I also spent a fair bit of time helping fellow chalengisti with their ride position. As seems to be the case quite a few were on the wrong size bike to start with, but, basic stuff like correct saddle height and simple reach assessment for those suffering bad neck pains were easy fixes and welcomed by the riders.

The evening meal at the hotel was the best so far, but, that would not be hard as I guess we had not been experiencing the best French haute cuisine.

The night ended early as we all knew what lied ahead and we drifted off to sleep to a band on the hotel terrace, apparently playing traditional French songs. The reason why you cannot name an iconic French band like the Stones or Beatles being self explanatory they are obviously better musicians than they sound.

Sunday morning started with a brief few kilometers from the hotel before a 20km and 1600m climb. Stale had been advised, medically, to stay off the bike but ignoring this he hoped to rest up for another two days and join us for the Ventoux stage.

We had come now to be known as team omelet after our unscheduled stop before the rest day. We had also come to realize over the rest day that we were considered the slow guys and if you were unfortunate enough to be joined by us at a feed stop. You best drop what you were doing or eating so as not to be part of the unwashed mob.

Matt was back with us today. We cleared the first climb well and even picked off a few riders and the day was no less a tough one without any iconic climbs and we join Phil the organizer for the ride from last feed to our hotel. I told him I deserved that evenings after dinner prize for escorting him safely to our hotel after the last days climbs.

Phil being as fit as a butchers dog and in no way needing my assistance. However I actually did get the prize. One, because I had the nerve to ask for it but, also for assisting the riders with minor repairs and fit on the rest day.

Day seven dawned and now you started to see the toll it was taking on fellow riders as well as yourself. I had such big bags under my eyes I feared British Airways would charge an extortionate amount in excess baggage on my return.

Truth be told the incredibly hard days and five to six hours sleep were taking a toll on everybody. A pattern began to emerge as the climbs melted into one, some long slogs, some brutal and incredibly steep. In the morning I was struggling to stay awake, but after stopping for a few café au lait en route I was much better and stage seven was good for me.

I really gave it full gas on several climbs and it did feel good to reel riders who had rushed every feed stop as team omelet took it’s sweet time always being the last to leave each location. We built a good bond with the broom van because we saw him so often, and James the mechanic on board knew we were really fast if wished to be.

The afternoon turned wet and miserable and on the last climb I rode off to just get to the hotel and get warm. Day seven apart from the weather was a good day.

Ventoux day arrived and the previous night Stale had managed to get to our remote hotel in a hire car. A French train strike meant it was a difficult journey and hopefully he could return the car at the second attempt and meet us at first feed. This he duly did and the team was complete again.

Small victories in the pecking order were our focus as team omelet. The day starting with a 22km descent I knew it was my chance to be first to the bottom and the waiting support. I had discounted the 3km climb from the hotel first and Phil pushed the pace heading into the tunnel that marked the start. Fortunately I had managed to stay about 5th wheel. The descent was mine and about 4km in Brian, by far the strongest guy on the challenge joined me and we carved our way down. He scraped a pedal and was nearly off but he waited on the small inclines and so together we made the first van.

All day we dodged rain clouds getting wet occasionally. Ian punctured twice as the rims got hot on descents and overheated his inner tubes. I talked him into lower tire pressures and he would be safe on the down hills from then on.

Before lunch was a flat section where we had to time trail. Boy did we fly, Bob is an engine, Matt also could get on the front and drill it and we smoked along at 27mph for 25km.

Ventoux came into view just after lunch and although not the tallest we had ridden it’s imposing nature is that it is singular in it’s presence surrounded by nothing and baron for 3km from the top. The weather turned awful on that mountain you could see the lightning and descending riders shook their heads as we pedaled by in the other direction.

Ian flatted on a nail and everybody we swept by in team time trial mode was now passing us meaning we would be last on the ascent.

Still dry I questioned my sanity not for the first time on the event. Normal people would surely give it a miss and return when the weather was more co operative. 21km to go and Stale stops talking and begins to up the pace. Ian and I go with him and the conversation stops. This is serious. We pass people as we get into the climbing rhythm. 12km to go we hit a stretch of 12-14% and Stale admits he may back off a bit. Ian seizes the opportunity and kicks. Stale reacts, I cannot and know I must keep my pace with such a long way to go.

The two go out of sight with 8km to go. The coldness of this climb is indescribable, the roads are soaked but we are dry, but, still the wind as you reach the exposed section is brutal, with wind chill the temperature is close to freezing.

I summit, Ian has beaten me by about 10 minutes and Stale by 5, but both have caught riders who left the last feed over 30 minutes before us. The support crew rush to get us out of sweat soaked clothes and into every piece of warm clothing we have for the descent. Photos of the Simpson memorial will be missed as we shiver our way to the bottom. Back into 26 degree heat in leg warmers, long finger gloves and every top I have beneath my beanie and helmet we roll into the hotel a s children splash in the pool like aliens on bicycles.

We hear that cool kids who rush the stops got caught in the mother of all hail stone storms atop Ventoux. It pays to take your time lads we say and feel quite smug that the mountain gave us a squeeze.

Penultimate day was easy to overlook, but 145 miles when your mind and body is starting to see light at the end of the tunnel was never going to be easy and so it proved. However on this day team omelet was on a mission. We had many a coffee stop on this leg but we rode so well as a group. We rode into the mountain top hotel that night as group and finally put to bed any resemblance of being slow.

Final day and only a mere 100 miles and 12,000ft day. Straight after breakfast we were on 15% climbs as we skimmed the spectacular route des Cretes and the amazing gorges of Verdon. Feeds and lunches were very relaxed Phil insisting we left them as a group. So after lunch the final big climb to Baisse de Rourebel. A right turn over a bridge and it began. Big Bob who had said easy day lads just chill was on the front for omelet. Soon the big guns started to stretch the elastic, ping after ping riders popped. Then the elite were formed top 8 guys, three Aussies, an American and a Dutchman and blow me down 3 of team omelet.

Matt went out with a few kilometers to go, then Stale, but Ian looked in his rightful place. I was hanging in then the road forked and they boys kicked and I was gapped. Ian stayed in British champ as a young boy, still only 25 but having given up cycling at 18 you could see he still had what it takes in the last few days. Ian stayed in almost to the top were Brian sprinted for the summit. Matt, Stale and myself worked to be next over and CCC was over.

What an event, without doubt the hardest thing I have ever done. To get up every day and ride mile after mile mountain after mountain. Imagine your hardest ever ride then repeat that an do it again and again for ten days straight and you will have some idea.

What can I say about Team Omelet. The chances of finding four other guys with the mindset of trying to enjoy it but having the ability to smash it must be like winning the lottery.

Bob Pugh(Jens) wicked descender, powerhouse on the flats and spinning to win on the ascents.

Ian Pugh the yoof who rode himself into the elite group of this challenge.

Stale Hoym, Viking and hard case, humour in adversity and the most famous arse in Annecy .

Big thank you guys, a joy to have experienced it with you. So glad it’s over, but sad real life will take back over.